11 hours later, I am standing in the dish pit in the kitchen.

Everyone’s gone home, the remaining silence a welcome respite from the night’s events.  It’s my favorite time of the shift. The only sound punctuating the stillness is the spray hose attached to the sink, the one I’m using to blast away a day’s worth of grease, food particles and God only knows what else from the bottom of my slip-resistant shoes.  My knees are blasted from walking a 17,000 square foot building for hours on end…ears ringing from the cacophony of loud chatter from guests in the dining room, the shouting of cooks back and forth, the rock music blaring, dropped dishes or bar glasses hitting the floor. My eyes are bloodshot and tired from too much caffeine, too much kitchen smoke, too much squinting at menu orders on paper chits endlessly chattering from the kitchen printer.

As I spray away, I reflect on the shift.  The kitchen went down hard tonight, worst night in a while for those guys.  I spent a lot of my time kissing the collective asses of our guests, comping checks while swearing under my breath, wondering why I still do this to myself.  It’s not their fault; we were two men down and Saturday night is the great equalizer in all restaurants:  you better have your shit straight or else.

When I got home at 3am to a quiet house and a much-needed glass of Maker’s, I started to reflect. I began thinking about my career in this industry, which led me back to my first true management gig: The Full Moon Cafe. 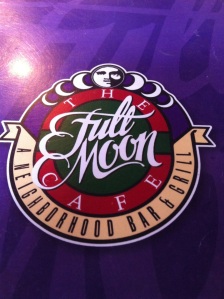 This legendary Tulsa favorite was my home for 2 years in the early ‘90s.  While it’s $1.5M annual sales were much more humble than what I’m running now, it was a very popular place in a town with a lot of competition.

Change is inevitable, however, and the iconic bar and grill on Cherry Street is no more.  Last week, the owner shut the place down after health department concerns, vendor threats and lack of staff.  Allegedly he was not paying his bills, nor his workers, on time.  The Broken Arrow location still exists but the blood is in the water I fear… 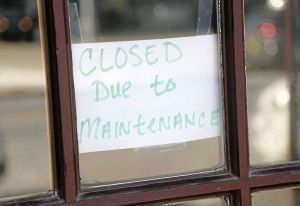 My memories of the Full Moon circa 1992-94 bear some resemblance to the one that just shuttered but the patio was added on later and someone thought dueling pianos were a great idea after I left.  During my time, though, it was just an honest bar and grill serving up American classics.

My favorite time of the day was always in the morning, before we opened. The steam from the tilt skillet, the smell of coffee that everyone is pounding at 6am, the cooks fighting over the radio. It’s a rattle and hum that existed only in that place and at that time.

We had monthly soirees held to celebrate the lunar cycle.  We executed them like New Year’s Eve events, down to the cheap hats and noisemakers.  We always had a live band, and at a few seconds before midnight we would count down from 10 and then pour free champagne.  One month the owners arranged, without warning, for a local high school marching band to come roaring through the middle of the crowd.  It was awesome.

Full Moon was also the place that had a “Women’s” bathroom sign on the inside of the Men’s restroom door.  Upon finishing their “business”, the guys would head towards the door only to see the Women’s sign and panic, thinking they had been in the wrong bathroom.  It was the same for the women’s bathroom as well.  Good times.

I remember the night we re-painted the entire inside of the restaurant. Procuring volunteers and opening the beer taps we cranked up the stereo and went to work.  After 8 hours the fumes from the dark green paint mixed with exhaustion and more than a few pints had us all cranky but we completed the task about an hour before we opened that day.

We sold these great tee-shirts with the FM logo on the front; on the back was our famous saying “You Can’t Be First But You Could Be Next!”.  I’m sure they were talking about being next on the moon, but in that phrase existed a bit of innuendo when discussing a particularly attractive customer or new employee. The staff wore these shirts as well and we would do special tees for different one-off events: anniversaries, charity events or “Blue Moon Parties” (a blue moon is the 2nd full moon in a one-month period. They don’t happen often hence the saying “once in a blue moon”).  A boyfriend of one of the bartenders also made tie-dye versions of these shirts which were a huge hit.

While I’m twenty years and many restaurants removed from Tulsa, the Full Moon holds a special spot in my soul.  It was the first time I was trusted with running a business for someone.  It was the first time I lived on my own; 1200 miles away from my family back in Vegas, that post-college feeling of freedom taking hold. I was in charge of booking live music for the place; Tulsa has some amazing musicians who maybe won’t ever get their due outside of Oklahoma, but are gifted nonetheless. Many were the night I would go to a little bar or even someone’s backyard to hear an unknown player in anticipation of booking them for the FM. I didn’t have any experience with these types of responsibilities…but the owners and the staff and even the town had a faith in me that I didn’t yet have in myself.

Farewell to a classic. 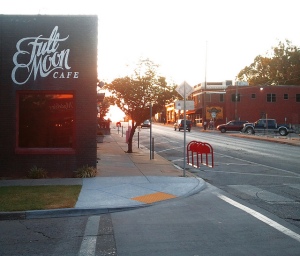 PS: Here’s a link to the Tulsa World story about the closing