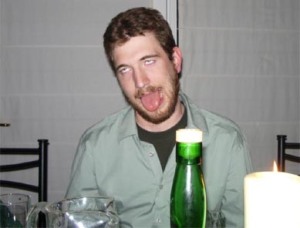 This is not a restaurant or food post, but beer is mentioned several times and thats kinda like what I write about so there.

“Make the pledges get the keg!!”

“Hell no!  We had to do dumber shit than that when we were pledging…make ‘em!”

7 months earlier, I had joined Tau Kappa Epsilon fraternity.  It was a turning point for me because UNLV (at the time) was mainly a commuter campus; I already knew a bunch of the kids going there from area high schools and wanted to meet fresh faces. Joining up with TKE could provide a social outlet that I was looking for since I couldn’t afford to go away to school.  To this day the boys who turned into men over those college days have remained my closest friends even 30 years removed.

At the time however, we were just looking for cheap beer.

March of 1986 found us at the TKE house throwing a St. Patrick’s Day bash, not unlike many of the others: loud music, coeds and cheap, green beer.  A few broken glasses and hearts notwithstanding, the party was a success.  Despite our best efforts, however, we did not consume all of the green elixir.

A few weeks later, hangovers gone and coursework attempted, a group of us found ourselves at the house with not much to do and even less money to do it with.  Talk turned to beers and we anguished over how to score some.

“Get the keg”, someone chimed in.

“Get the keg, dude.  Its at the bottom of the pool”, he replied.  We looked at him like he was nuts but went outside anyway.

In the light of dusk we peered over the edge of the pool and true enough there was a 15.5 gallon steel barrel, reflecting the scant light like a diamond…a beacon glistening as a solution to our most selfish desires. It appeared that someone, after the March 17th shindig, had punted the keg into the deep end.

“Make the pledges get the keg!” more than one of us decided.

So orders were given and shirts were stripped off.  I don’t remember their names but I’m sure their pledge monikers were something like “Fluffer”, “Balls Deep” or “That Pledge That No One Likes”.  Down into the pool and up with a ¼ full keg of warm, week-old, green Bud Light.  Glorious.

We scrambled to get the manual pump and attach it to the top. A few strokes and we were rewarded with foamy shamrocks of awesome.  We cheered to our industriousness and we cheered to our friendship.  Hell, we even cheered to our cheers.  We were sure that no one was having as much fun as we were.

Soon, however, talk slowed and the energy in the room changed. We sat, elbows on knees and hunched over our cups, nodding to this comment or that opinion.  Something was amiss.  The loud talk we shared and boisterous lies we were telling had decreased to a whisper, until someone stood up first in a haste.

A quick run to the kitchen and the sound of a splash on porcelain. One by one over the next hour we each made our way to that place and commenced unloading the contents of our stomachs into the sink.  Ramen noodles from dinner and the betraying beer, both tinted green, made their way into the white basin.  One of us would come back to the circle and exclaim “no, I’m good…” only to turn pale and run back.

Turns out that the beer didn’t take too favorably to being shoved into a pool and made to percolate for a week in the warm sun of March.  It took its revenge on five 20-somethings, who felt like kings for a small moment in time, only to be brought back down to Earth on green wings.

Join 677 other subscribers
Lyssy in the City

"NYC Based Food and Travel Blog"