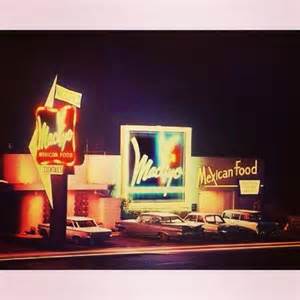 Every Wednesday was payday.  Every payday was dinner at Macayo’s.

My dad was working at Wells Cargo, a trucking company whose name was a riff on the Old West overland mail delivery company.  Each week on that special day he and I would make our way to one of two places:  a worn-down North Vegas casino called Jerry’s Nugget or an equally dusty relic known as Joe’s Bar.  At Jerry’s, there was a wheel to spin for every blue-collar grunt who cashed their check there with a chance to win a free shrimp cocktail, a free beer, even the chance to double your paycheck.  I don’t remember my dad ever winning a thing, but it was fun to watch him go through the motions. 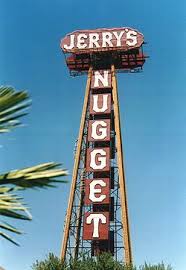 Joe’s Bar was also a North Vegas phenomenon.  Here was a place a young man whose mom needed cigarettes or whose dad needed a beer could could ride his bike towards and venture into, age be damned, to procure those items.  As long as they recognized me, I was the errand boy for vice.  These were different times…

Joe’s was a dusty bar, package liquor store and tiny casino all in one.  There was a drive-thru where you could get booze, sodas whatever.  Inside, it was always nighttime, regardless of the afternoon sun beating down at 110 degrees outside. Cool, dark and thick with cigarette smoke, Joe’s Bar was the perfect spot for those too down-on-their-luck to make their way down to the luxurious Strip.  My father would make his way to the counter, paycheck in hand ready to be signed and handed over. Cigarette dangling from her lips the clerk would count out the bills back to my dad and we would leave. No wheel to spin at Joe’s but I’m sure we received an unhealthy dose of second-hand carcinogens in exchange.

Back to the house to pick up Mom and my little bro Mark.  A short 20 minute drive to the altar of Mexican-food-abduction-by-Americans:  Macayo’s.  Macayo’s was a small chain of restaurants that began in Arizona and spread to Las Vegas.  Our local outpost was a regular spot for those in the area and we kids loved going there.

Their claim to fame was the “TCT”, listed on the menu as the Toasted Cheese Tortilla.  Basically mixed cheddar and jack cheeses sprinkled onto an 18” tortilla and heated through on a hot flattop griddle.  This oily masterpiece was then sliced like a pizza into 8 pieces which we would hungrily grab for.

The kid’s menu consisted of typical fare:  hot dogs, cheeseburgers, mini quesadillas.  None of these however were a match (in my 10 year old brain) for the taquitos:  corn tortillas filled with shredded beef or chicken and deep fried.  I loved plunging them into the cheap salsa always present at the table and devouring them.  The best part of the meal came at the end, however.  Dishes cleared and spoons at the ready, the waiter would bring a small dish of rainbow sherbet for each child, the scoop topped with a tiny pink or blue plastic donkey.  I don’t know why it made an impression, but I remember the donkey to this day and use it as a story device when I talk to my staff about that little something extra.

One thought on “Dinner with the Family”